As you all know by now, every year I ride somewhere internationally.
Not this year....I had considered picking up my bike in Ireland and going
through Poland, Ukraine and maybe parts of Russia, but my heart really just
wasn't in it so King Bob (if you don't know who he is, well...you are behind
reading my blogs) suggested I ride through my own backyard.
Yosemite.
Lassen.
Crater Lake.
Glacier Park.
Yellowstone.
Arches.
Bryce Canyon.
Canyonlands.
Zion.
And some others I'm probably forgetting.
The original plan was to leave August 29th and my first stop, Tahoe and visit a friend.
The fires in Sonoma, Berryessa and Hamilton area sent toxic air there.
Cancel that.
The next stop was a camp spot at Lassen National Park.
Except just the weekend before I was supposed to leave, Hwy 1 shut down due to yet another
fire around Russian River. When I was coming home from my last training ride,
on the 101, I got many evacuation text messages on my phone.
There was very thick smoke and it was quite harrowing.
There were patrol cars and rangers at every exit,
signaling that if the fire got too out of control,
they would have shut the 101.
I felt lucky to make it home that day.
Lassen Park....toxic air there too now.
Cancel that.
My friend Kenny in Eureka offered a warm bed and he makes excellent dinners.
I started Sunday morning, August 30th, a day later,
and first stop was two birds cafe in San Geronimo.
If you've not been, strongly advise it. Delicious.
Beautiful patio under massive trees.
Off the beaten path.
Cute! 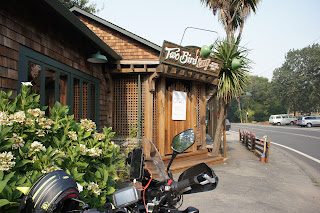 It's a hotel too. 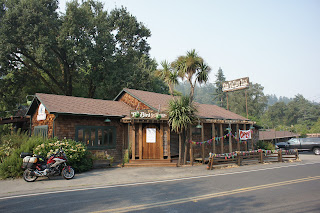 Guess who's nose that is poking out of the bag? 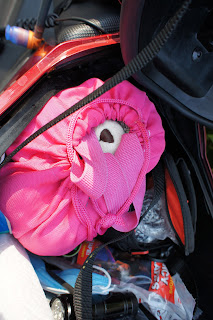 As I rode toward Hwy 1 through some small towns,
you could see just how close the fires came to home.
These signs were everywhere. 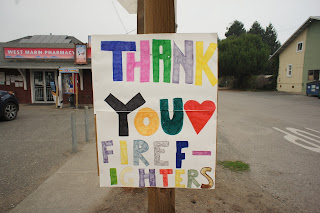 As you can see the air is still thick with smoke.
After a couple weeks of breathing this crap, I was ready to have blue skies. 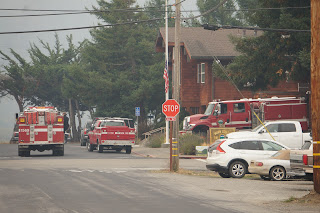 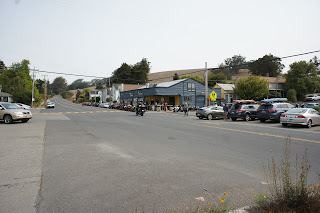 Finally Hwy 1.
The grey haze of smoke still visible, even out to sea. 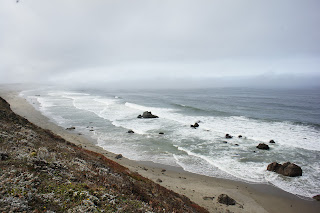 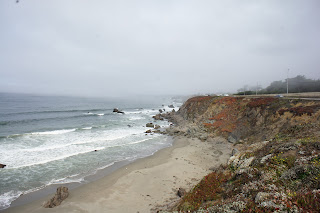 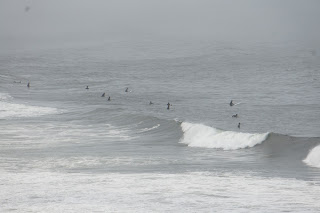 This is the spot where the previous week I had to do a 100+ mile
detour because they closed the highway down.
I like this photo because you can see the scorched trees right
next to one that didn't burn. 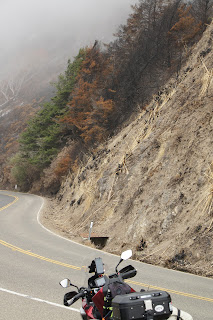 Black all the way down to the waterline. 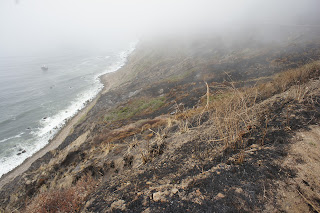 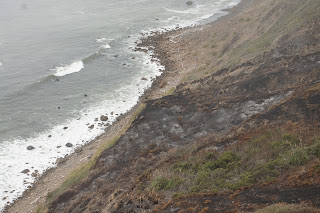 Finally by Marshall, the smell of smoke was less heavy and the skies opened up.
A beautiful rolling fog bank coming in down the river. 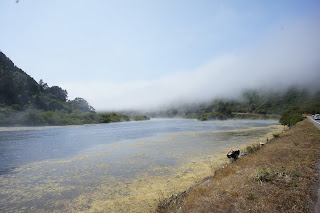 Once I made it north a bit more, saw a creative roadside outdoor garage sale place.
Trusting people.
Just drop your cash in the box and take what you want.
Honor system. 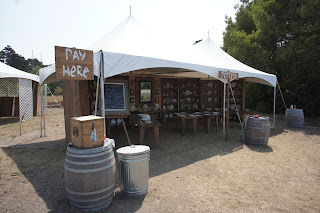 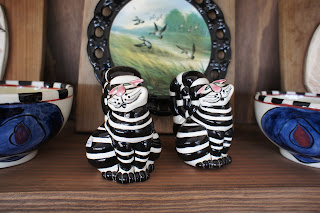 Here are some other vendors. 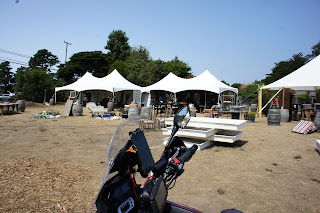 Next.
Avenue of the Giants.
I'd heard that the Santa Cruz fire came close to the Redwoods on the peninsula.
In particular around Boulder Creek but later learned they were saved.
Perspective. 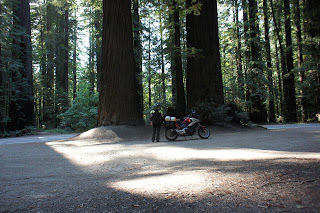 And here is Kenny.
With his rather impressive workshop.
I always bring a project for him to help me on with the bike.
But first...dinner.
That night was homemade linguica sausage and saute peppers.
I ate as much as he and his wife together. 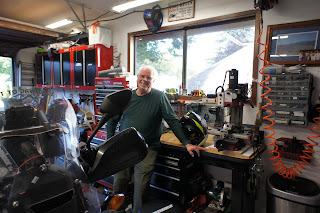 Time to take Grindle out of the bag and get settled in.
Funny, true story.
I use sunblock powder, (cream just smears inside my helmet)
and I had a small cosmetic powder brush to apply it.
I took it out and laid it on the sink counter and stepped
away for a few minutes, came back and it was gone.
With a very mischievous looking cat nearby.
Kenny found it a few days later. 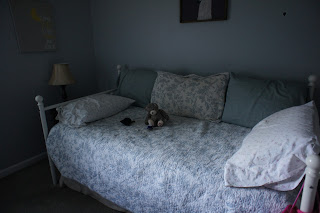 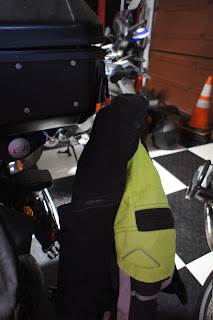 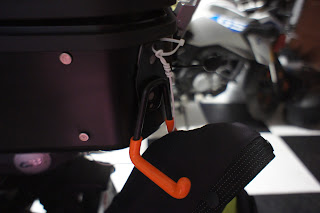 Project #2.
Mount Michelin Man.
Collectors item from Japan.
Been on the last 10 years of rides with me.
Can't do a ride without him. 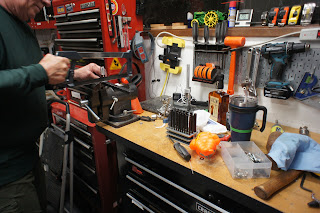 Mounted.
Thankfully, he's not fallen off. 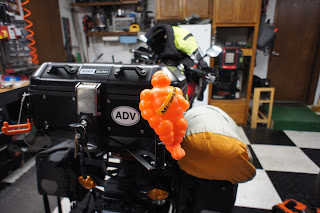 This ends my California portion.
Glad to be out of the smoke and heat.
Sad to have missed two national parks already.
Might go through them on the way back.
Glad to have a break from work.
Happy to have a great motorcycle
(which started as a back up temporary) to ride.
Next. Oregon.
And my own brush with 'Deliverance'.
Posted by specialagentnancy at 5:04 PM No comments: