Well not yet officially but in one day.

Many of you know I"m a foodie and eating here is always somewhere between good and excellent.
Usually baked, stewed or boiled but rarely fried or greasy. Truly healthy.
This photo is of Menemen which is eggs, tomatoes, banana peppers and probably crack. Highly addictive, difficult to kick and a must every day.

So I had to stop at the city sign of Menemen to mark my love of this dish and it was a good thing too since it helped me get the grumpy hoteless in Pumakkale to make some for me instead of trying to feed me the 'tourist' breakfast which consists of a plate with artistically assorted jams and jellies in small plastic containers and a couple sad olives and a slab of cheese and white bread. Yuck!
Our "Cancun" hotel was awesome early in the morning...everyone asleep with the beach to ourselves.
View from top of the city.
First historical site (remember we skipped to ridiculous wood Trojan horse) and pressed on to Bergama.
Ancient Roman amphitheater.

Hot Hot Hot
Stopped for refreshing soda water with cherry where one of the locals pitched me in French about the dreaded carpet seller...
Next on to Foca. Harbor town.
Oops, I skipped Yenifoca. So the travel book touted the excellent campsites along the water. Pffffttt! Is all I have to say....rabbit excrement, dog excrement, sheep excrement....going to the bathroom without stepping on a bomb was not easy. There's still rabbit poop attached to my shoes.
This Turkish symbol around the BMW emblem was genius.
He showed us to the downtown area where we had breakfast....

....with lots of kitties.
Heart attack on a plate. I think this is whipped butter and honey.
And another kitty on Manish's leg.
Charming cobblestone grape leaf shaded streets.
Now I'm not sure what the obsession with bank card machines but this gas station topped off the guinness book of world records.
Stopped at a roadside fruit stand to get nectarine juice all over my chin and neck. Neat cabins for eating in the shade
Next stop Esphesus. This is a Roman milestone, in ancient times they were created with the Emperor's name responsible for building the road and when a new Emperor was crowned they would 'flip' them and put the new name, rotating the old to the ground.

The most famous part, the ancient library without tourists.
Mobbed with tourists and one Special Agent Nancy, on left side near column in the shade. 103 F
Ah, another stop and dip in the water after a long day of riding.
Next stop, Pamukkale.
Posted by specialagentnancy at 8:44 AM No comments:

It’s prime butterfly season here in Bulgaria and with my rock/sun shield on the helmet, well let’s just say I’m the equivalent of the serial killer for butterflies. Here’s one wedged in my helmet. I’ve managed to remove the others but this one is stuck well enough to make it back to San Francisco.

Here’s a photo of my bike, packed and ready to go (in less than 2 hours) and Manish’s bike, stripped down completely. Why am I always ready before men???
Now no trip would be complete for me without Luke’s amazing cheese sandwiches. Its Bulgarian cheese, hearty multigrain bread, more butter than any person should eat in a week and a Panini press machine and voila, yummy grilled cheese.

Got Toilet Paper?
Much as pilgrims will travel the religious trail each year as homage to God, so will I ride the potholed Bulgarian roads to see Mama Zarka, some of you may remember her from my Eastern Europe ride 3 years ago, she and her Grandfather nursed me to health after crashing and hurting my shoulder badly.


But not before a stop at a favorite off the trail restaurant where you wonder what kind of meat you are eating with all the taxidermy here. This man knew a little French and even lived in the states. FYI, the belief that foreigners hate American tourists is really not true. I’ve always gotten big smiles when I say I live in San Francisco. They are just generally happy to see people making the effort to visit, especially remote areas like this one.


Zarka made amazing food once again, stuffed peppers for dinner and this cheese, egg, milk pastry for breakfast. She even packed some to go for us. The food always costs twice what the lodging does but that’s all right by me. I finally slept a good night’s sleep, of course the local “brandy” aka moonshine, helped to send me on my way. It was rather impossible sitting at the dinner table with a bunch of local guys eating and drinking and eating and drinking some more to not do shots with them. 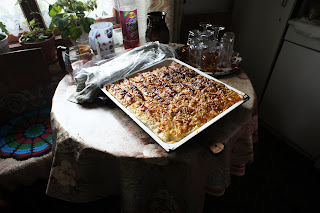 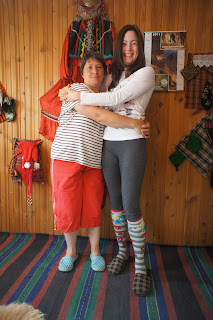 The next morning Manish and I started towards the Turkish border. We visited what the locals call Devils Throat, an underground cave with 300 stairs. I made the tour guide laugh out loud when I sampled Kung Fu Panda (which seems universal) with the statement “My old enemy, stairs!!!!” 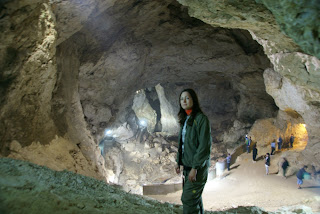 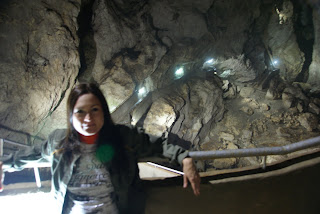 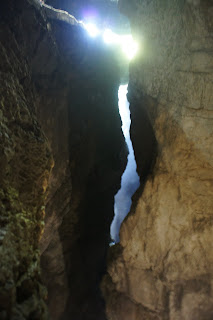 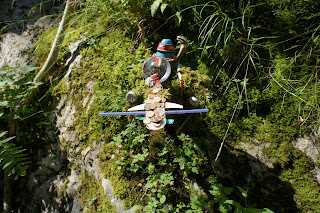 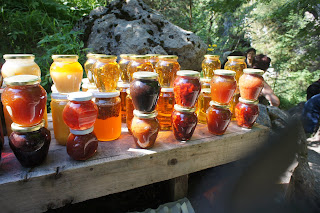 Later Manish got stopped by the police and they were all snickering when I pulled up going a reasonable speed and said they didn’t need my papers. Crossed the border in record time and they didn’t mention the 270 TL ticket I got the year before, who knows what the penalty is by now. And since I realized at the border after I left Bulgaria that the woman sold me Bulgarian money and not Turkish money, that was lucky.

Stopped at a Turkcell kiosk where they sold me a sim card and told me to try it tomorrow….well it’s tomorrow and it still doesn’t work. However I will admit, I did have a blond moment and had put the stupid thing in reverse but even when I figured that out, still doesn’t work! 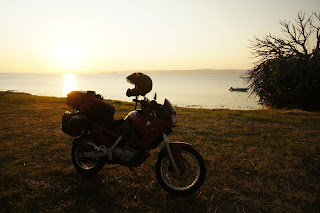 We finally made it to this camping site, thanks to Eagle Eyes for spotting it where we enjoyed the sunset and a swim in refreshingly cold water. Meat is the main part of a meal here, I feel a little bad for Manish being a vegetarian…well not really, more for me! I just thought of my nickname for Manish, kinda Native American, here goes; Eagle Eyes, Slow Feet.

My dreams that night were mainly of roving packs of wild dogs that would not stop barking. Yeah, even with the ear plugs I was minutes away from taking my 1 Mil volt stun gun to a couple of them. 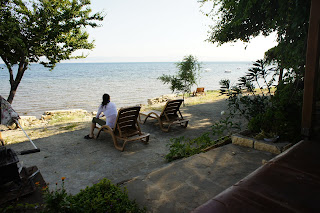 We Stopped at a gas station to eat and found this ‘petting’ zoo behind it. The sad state of the animals was heart wrenching. And what the hell is a Smurf doing here. Strange coincidence I was wearing my Smurfette socks.

Woke up the next day and spotted my first supper Hottie on a motorbike. The cutie gave me his number and he’s Turkish.
I spotted a shop where Manish was able to find a replacement turn signal and rear view mirror from his crash the day before. What luck, as I stood there waiting for Manish (again) this funny Bulgarian man on his bicycle pulled up selling pizza’s and we chatted it up.
Took a ferry to Cannakale and road along the coast. Got to Troy and I felt like Bugs Bunny in that cartoon where he complains about paying 10 cents to go through the Panama Canal and would rather walk first. We both felt  15 TL was not worth the site and pressed on but not before a Japanese tourist bus pulled up!

We got to ride on marbles, and in potholes, and gravel and sand, but the marbles were the most “fun”. Basically it’s like chewed gum on a metal surface in the sun, with 1960’s roof white rocks stuck into them. As you ride over this crap it’s Poing! Ptink! as they ricochet up to hit your legs and watch out when a car is coming towards you the opposite way.  Stopped to chat with a local goat herder.
Rode through some coastal towns to Behramakle and were nicely surprised by the historic hilltop ancient city where after a long day of riding in the heat was about to knock some boy's head off when he insisted I could not park in a spot but had to instead turn around a 400+ lb bike, down a steep grade of cobblestoned street to park not 10 feet away, Manish came to his rescue (and helped me with my bike)

We then came down the hill to what Manish called “Cancun”. I had no idea it was a major tourist spot, I had picked it from the photos online. Ate a fabulous dinner again! (I got something better for Manish than cucumbers and tomatoes this time).
Got to take a dip in cool water, boy did that help bring the swelling down.
Each day I put my feet in the boots....and at the end of each day, someone else's swollen, marshmallow toes, elephant man feet come out of them. It's scary.
Home for the next 12 hours. Neat white fabric tents on the beach, just like in SOBE, only a lot cheaper.
Next stop Bergama!
Posted by specialagentnancy at 1:57 PM No comments: