Serbia, Montenegro and Croatia...and a little drama near the Kosovo border

Women are always sensitive about age and weight. So as I performed yoga style maneuvers while packing my equipment bag to make it all fit, also weighed it a few dozen times to make sure I was under the weight limit, it was with relief after switching items from checked bag to carry on and back again, that I reached a final weight of 22.9 kilo and off to the airport I go.

The airport scale told me 2 lbs over the limit....it LIES!  But hey one more thing in the overhead bag won't kill the unlucky guy behind me as we found our seats on the airplane.

As I boarded the plane and passed through First Class, I quipped to the flight attendant serving Champagne that I would like one and he offered it to me with a big smile. Nice start....so I sipped my bubbly in coach and uttered a small prayer that my gear bag would make it on the plane, which it did. Arrived in Sofia without incident and upon arriving at Luke’s house asked for his wonderful cheese sandwich. (homemade bread, Bulgarian cheese and an insane amount of butter, pressed into neat little grilled cubes in what I can only describe as a George Foreman grill)

It wasn't until nearly midnight that evening that the boys rolled into town. It was the first time we were to meet in person and I was glad to see them. Five bikes in one small garage. 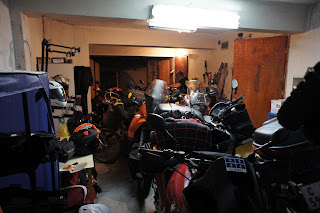 We fed them a simple meal of meat and salad and beer from a 2 liter bottle and all promptly passed out. 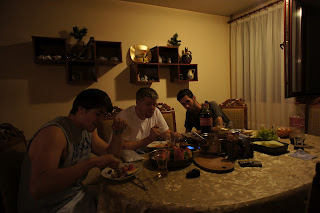 The boys sleeping the next morning. 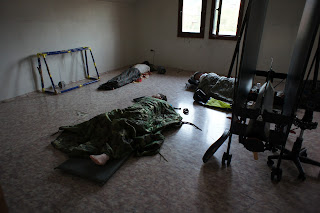 Adam and his problematic Pegaso. 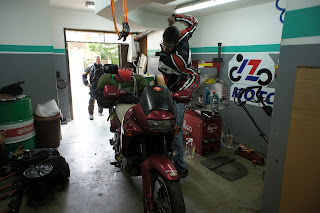 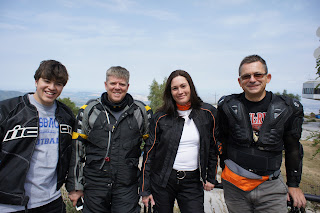 First stop was near a lake on the Eastern Serbian border where we stopped for lunch and enjoyed the view. I love bringing money to these small communities. 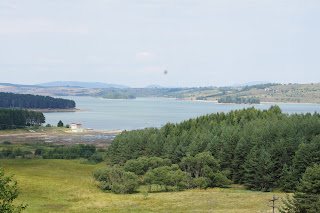 The food can be a great hit (super fresh local produce and livestock) or just plain disgusting. Today we were lucky except that it took over an hour for the food to arrive and we were burning daylight. 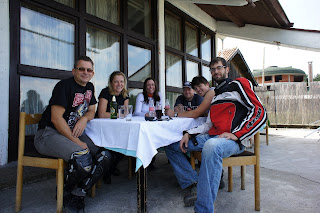 We raced after that to make our 2nd stop, Devil's Town and ended up on the shortest route but found it was dirt.  A couple helpful locals told us it was 40 KM to the town and we all hemmed and debated whether to do it since we were behind schedule and none of us were prepared for dirt (street tires and street gear). The adventure in all of us said let's go. It was a good road with what Danny calls rivets and dividends (rocks and ruts). 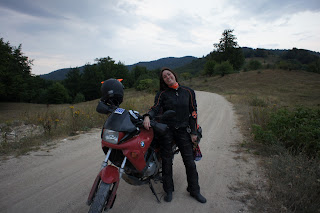 Luke is excellent on dirt so he went 2 up no problem....Adam followed his line and ended up going into the ditch, when I came around the bend I saw him climbing up out of it and raced on ahead to find Luke for help. This is the spot that I stopped at to wait for the rest of the group. 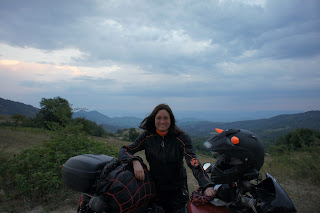 Adam built a nice fire, I pulled out my portable sink and gave myself a cold sponge bath and shared some soup in Dan and Daniel's huge tent as the rain fell lightly outside. At one point the fire seemed to flare up and we were concerned it got out of control but it was just the moss on the wood around the pit that caught fire. We were close to the Kosovo border so it made all of us very nervous. 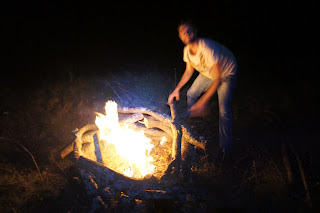 With rain clouds coming and it being almost dark, I made the executive decision to Guerilla camp here. 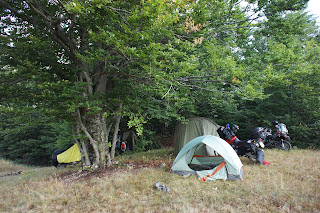 Next morning we arrived at Devil's town, a sort of mini-cappadocia where I met a nice Serb who spoke French and directed us to a restaurant where the woman served an excellent regional breakfast pastry made with eggs, milk, flour and cheese. A ripe melon and extremely thick Turkish coffee set us all off on a good start. 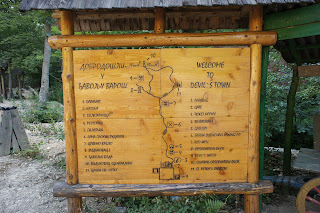 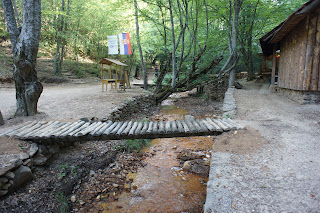 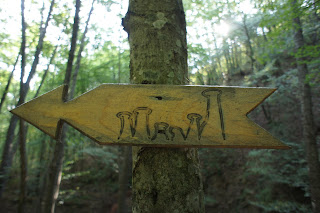 Every tied cloth, a prayer. 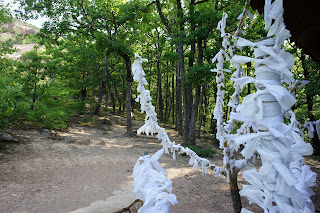 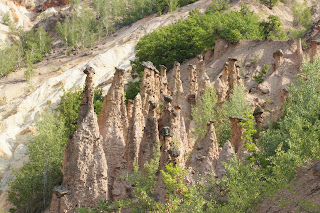 The rest of the day was grueling miles and miles to try and get back on schedule. We needed to cross both the rest of Serbia and Montenegro and get to Sveti Stefan. Luke took us through a beautiful mountain pass that had ski lodges on the top and then another twisty road that was so narrow in places that the dividing line was not painted. The hobbit (that would be me) had not eaten since 9am and after an ice cream and espresso stop at 3pm embarked on what felt like the longest, most twisty road I have ever ridden. The shadows made the road treacherous so I threw Dan under the bus and asked him to take the lead and let me know about oncoming cars using our rider to rider communication system. 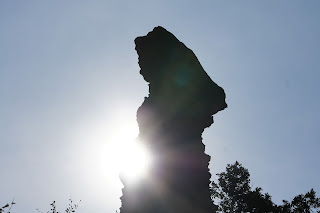 I will say that the intercom we used probably saved at least one of us an accident and certainly a lot of stress. Adam was not on it so we were often horrified by the blind passes he attempted while we would safetly talk each other through when it's clear. This day was very difficult and tiring for me, I was more than grateful that I had such competent and safe riders with me. Too keep things light we even laughed a bit about things like how their GPS recognized 7 turns on the whole 100km ride when there were probably 300+ in total.

We arrived near midnight and I was too tired to even eat so I pitched the tent and had a so-so breakfast. I met a Serbian couple camped next to me that offered coffee and what turned out to be extremely helpful information that got us back on schedule and afforded us one day of rest. 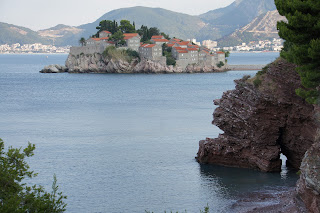 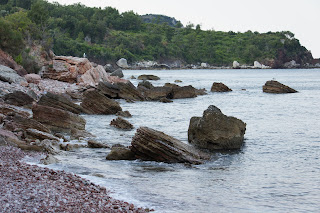 I spent the day on this beach and had a 25 Euro fish dinner that I saw come off the boat still flapping. It was decadent and the water cool and refreshing. Dan, Danny, Adam and Luke all went riding while I simply lay in the sand (with plenty of painful small pebbles) and enjoyed my kindle (Game of Thrones). 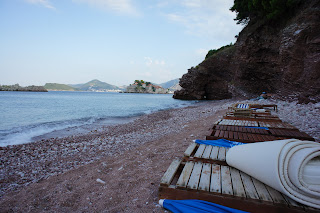 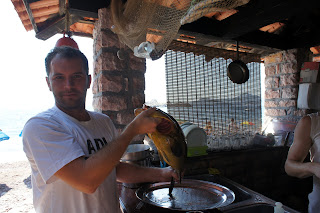 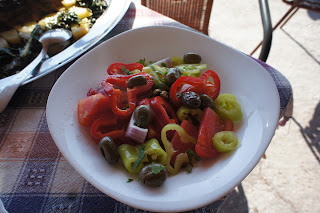 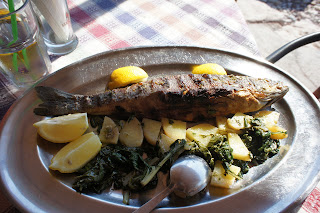 We rode to Bar, boarded the ferry and found our bunks....nothing to write home about but overall a good night sleep and a room as small as a meat locker and every bit as cold. (I finally had to shove my towel into the vents to try and stem the arctic blast coming from above.) 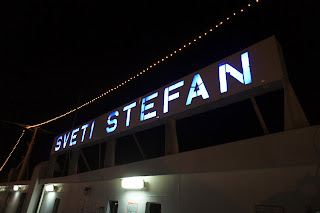 Posted by specialagentnancy at 1:49 PM No comments: