My sabbatical just won't end. I could be somewhat to blame for that...
Hawaii
Quebec
New Zealand
and lastly Alaska, by motorcycle.

It all started here on a site called ADVrider.com where like minded motorcycle adventurers post their ride reports, plan trips and meet.
There is the occasional troll to be found here but overall a great place to start.

I spent all of May training for this and with the help of my friend Paul, did the 12K service myself using the crappy tool set that came with the bike. He also instructed me on how to remove and re-install the front and rear wheel just in case I get a flat.

My first stop Lassen. Met up with Mario, who also rides the sexy Triumph Tiger 800 XC, for breakfast Saturday morning and set off together. 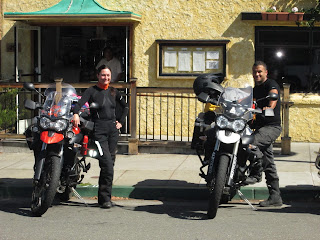 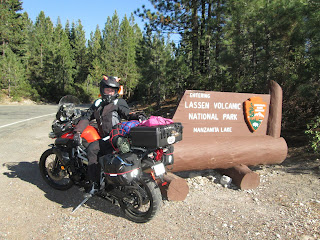 Mario was a cook in SF at Delfina for a while and well, when I saw him pull out his knife sharpener, I knew I was in for a good meal. 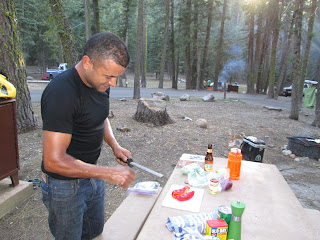 Roasted chicken over an open fire and tons of veggies. It was mouth watering, took long enough to savor and I got some cooking pointers for free. 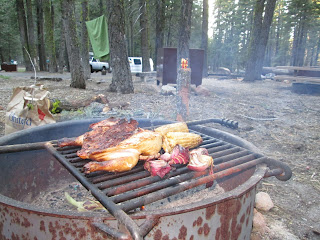 I had originally planned on riding with someone else. The event I'm trying to make has over 200 riders that come for all over but apparently only a few from California. So, encouraged by the ADV community, my determination to get there and some blind trust that things will work out, I set off on my own.

Except I wasn't alone. Mt Shasta was my constant companion. 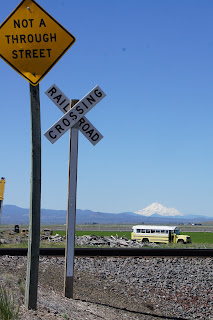 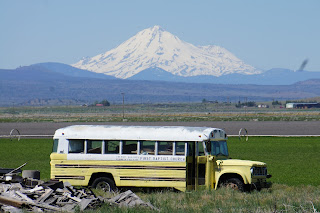 And I saw this adorable colt with it's mom having lunch, which reminded me of my growling stomach. 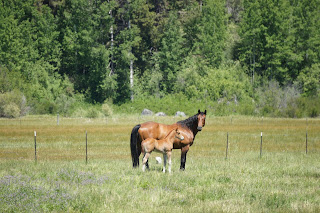 Every good ride always has some pork product. It's the motorcyclist  mantra. This time BBQ pork ribs. 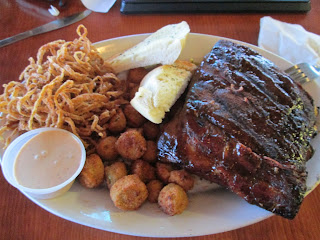 Not long after I arrived another bike pulled up. It's a special kind of gravity. We stick together. We wave hello. We stop to help. And we trust each other to know good BBQ. 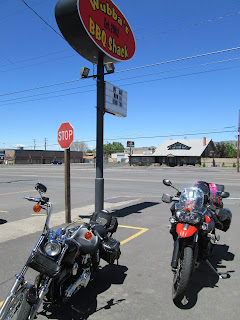 Made it to Crater Lake, OR 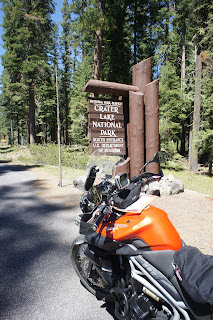 I found tons of snow on the ground. I was vehemently warned about the very active bears at this campsite. I was nearly alone and I was scared.
Even the water didn't look right. 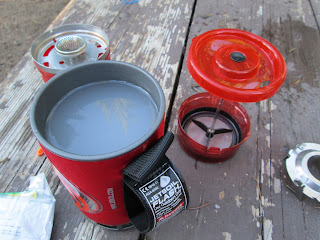 I foraged for wood but didn't need to as my only other neighbor, this nice man Ron who went to Alaska the year before offered me some from his huge pile. 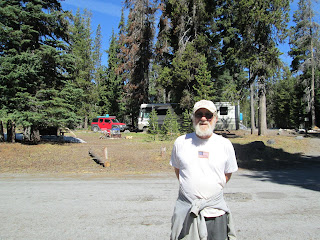 When the forest patrol pulled up to my camp, I thought, how nice, they are checking up on the ding-dong camping out here alone.
Nope.
I was read the riot act for stepping away from my fire to pee. 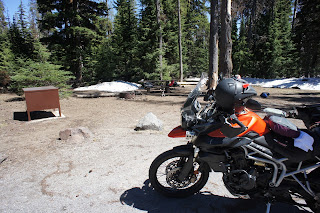 I decided to pitch camp early and ride to Crater Lake the next morning....Wow! 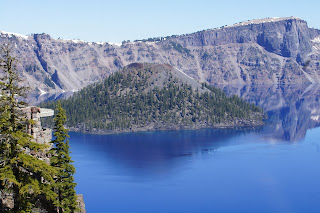 Lots of signs for idiots. "walking near the edge can cause injury or death"
So I sat on one of the edges and admired the view. 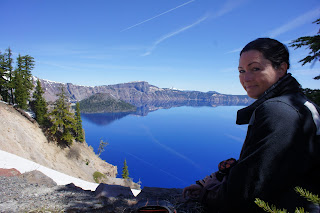 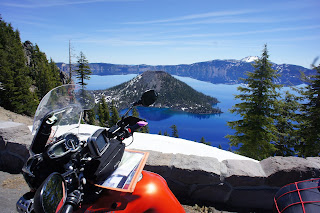 Took the road North towards Eugene and just about in the middle of nowhere found this place. There were a lot of cars out front and my stomach grumbled it's opinion and so I stopped. 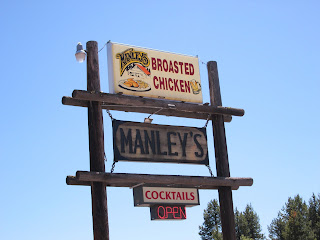 I knew this was my kind of place when this sign was on the door. 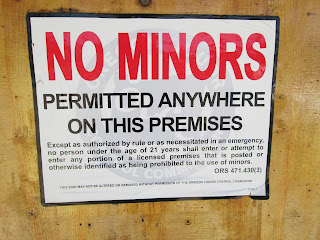 And the chicken...what is broasted chicken? It's cooked in a pressure cooker, then deep friend and served up. This was righteous chicken. 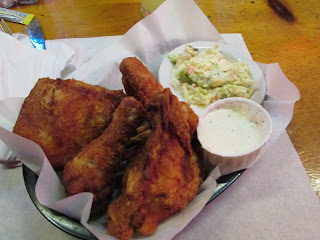 Got to Eugene, where I checked in to a quaint hostel and had the female dorm room all to myself. This place was full of smokers who all hung out in front, hacking and coughing up a storm. 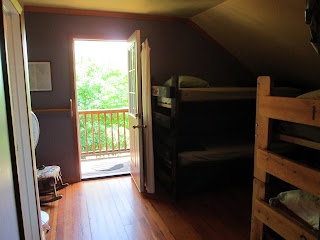 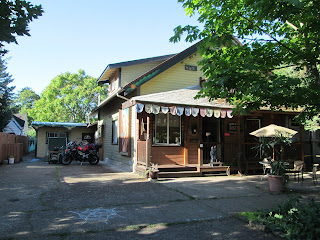 Danny, his father Dan and myself rode from Bulgaria to Portugal the previous summer together. I blogged about that but if you missed it, you can also see the report I wrote on ADV since it's a slightly different perspective for motorcycle readers. 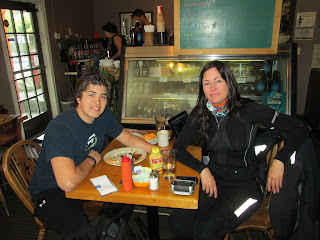 Danny's got a lot of passion about sustainability, Apple products and his long time girlfriend who lives clear across the US in Rhode Island.

He also knows how important eating well is for me and I must say this is one of the best Americano's I've ever had. 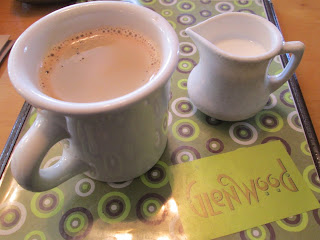 It's amazing how people light up and get chatty when I tell them I'm going to Alaska.
Yup, on a motorcycle.
Yup, solo.
So the kind retired gent at Manley's told me to take the 99 up to Portland (my dad found the same route too). Lovely farmland on both sides and not many cars. Some real impressive farm equipment (which cleverly hid the patrol car checking that people slow to 20 mph in the school zone) 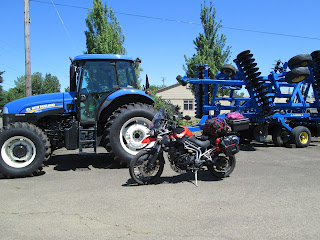 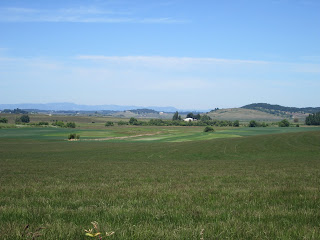 Made it to Portland in good time to see my USF classmate Brooke with her flirty boy Hayes Sami. 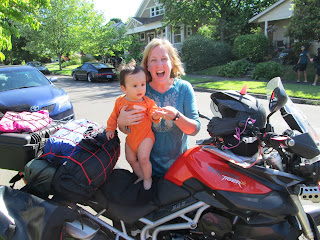 And tomorrow I meet up with Jerry, a fellow ADV member, who offered to ride with me partway to Seattle.

What could go wrong?

Posted by specialagentnancy at 7:47 PM 2 comments: