So we set off from Sofia to go to Trigrad where my Bulgarian Mom lives. Via the route that I crashed on last year. We took a slightly different route to get there...found all of these wonderful public fountains along the way where Luke often replenished his thermos while I goofed off. 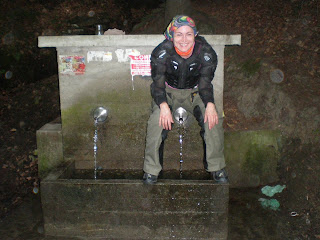 We were on some nice then not so nice twisties up in the forest and two BMW's roared by us...turns out Luke knows one of them so we stopped to take a break, they drank beer and fed the Hobbit. 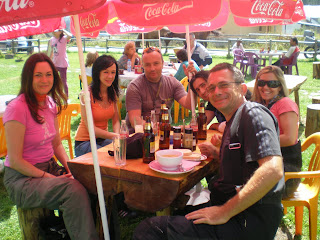 The area is full of Gypsy's, here's one of their homes...now I know it looks abandoned but one of the men walked up to it after I took this photo. 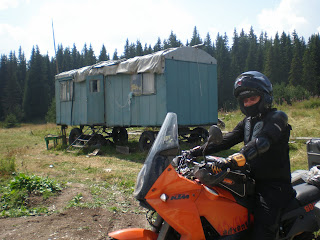 Nature is pretty amazing...things can grow out of the harshest environments like sheer rock but when I saw a small christmas tree sticking up out of a huge pothole well I realized that some kind motorist that probably lost his rear axle from it decided to alert the unsuspecting next drivers.
Next stop; destiny. Now I decided to dedicate this ride to a colleague of mine Linda who is an inspiration both personally and professionally...Linda I did it and you can too. 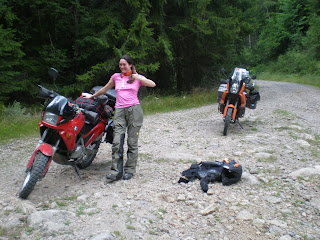 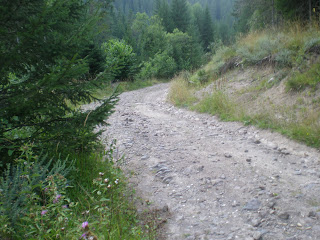 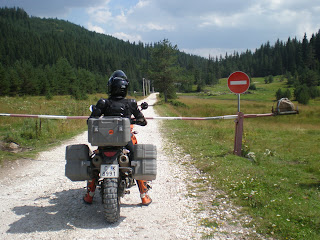 Now Luke explained as any good host/tour guide would that this 20 km off road trail is now a refuge for wildlife. How wonderful so the bears and other forest animals have a home, however he also explained that for the correct fee one can enter these areas and hunt. ?!?!?!?!
Yep big rocks, ruts, sand, sharp turns and soon a steep uphill...where the bumps were so big that I lost the right hard case. 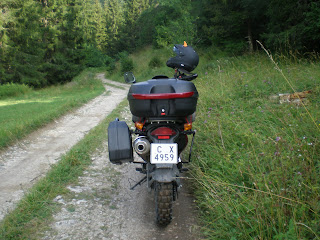 So while Luke (bless his heart) went all the way back to find it, I decided to photograph bugs only slightly comforted by the fact that I have a 1 million volt stun gun that might, MIGHT just disorient a bear enough for me to run a little ahead of it. 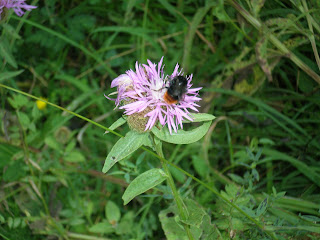 So when Luke got back we zip tied the cases back on... 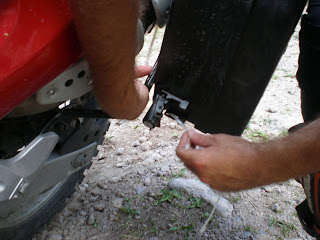 Back in the canyon of Trigrad...just beautiful here.That's a cave tunnel to get to the village. 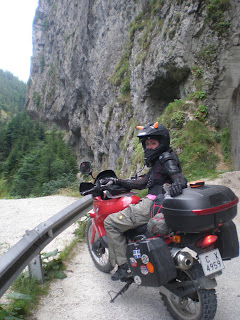 We made it, reunited with Mama Zarka. 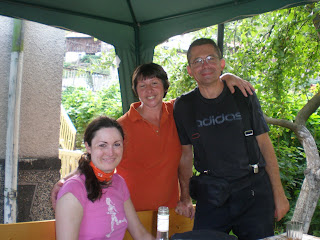 The villagers were making a homemade tomato sauce and jarring them. 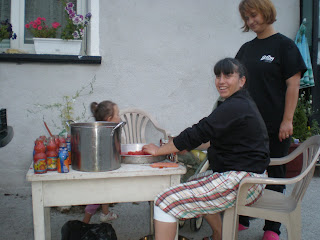 Next it was time to lighten the load and dole out the gifts and the most important one was an American made pocket knife to my healer. 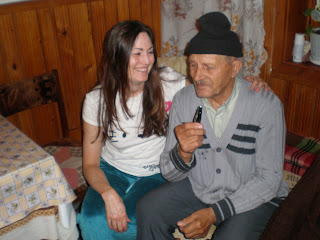 Where we ate first dinner. 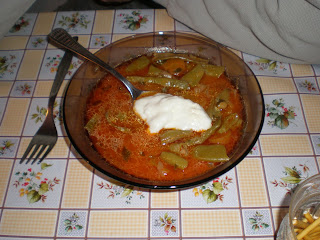 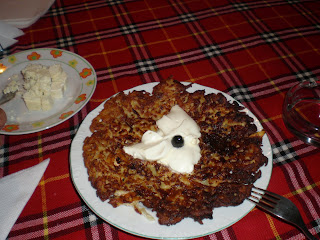 Now I'm not complaining, Monique would say I ate like a linebacker but let me tell you that after these two meals all I could do was lay down.
Next morning we did it all over again, this was pretty cool, some kind of thick sweet syrup with baby pine cones in it. 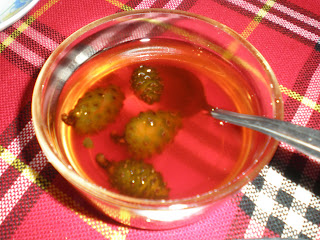 This is a very old traditional house 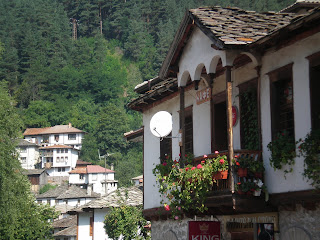 Next was pretty miserable, we had planned to cross into Greece for a while and catch the motorway but were turned back at the border because they could not allow a US passport through that station. It added 100km through some windy, low valley area that was hot as hell but we had a stop and goofed off with some cows. 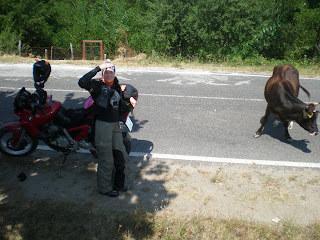 After a few more hours of miserable riding about 30KM from the Turkish border we stopped for watermelon, it wasn't that good in terms of flavor but it still tasted devine! 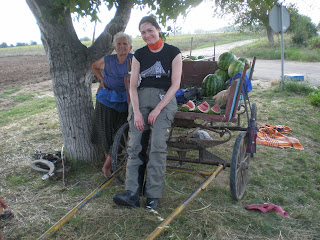 Now these stork nests are everywhere and I finally photographed one with the bird in it. 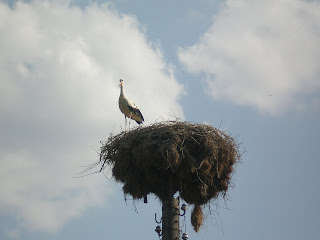 Now came the white knuckle ride from hell. We stopped about 80 km from Istanbul to call Volkan who kindly offered his hospitality to us to tell him we would be late...then Luke suggested I take off and he would catch up with me. I got on the TEM and hit 120KMPH expecting him to pass me pretty soon.
10km went by, no Luke.
Another 10km went by, still no Luke.
Finally got to 40KM from Istanbul and stopped to check my phone and he happened to call me. He was convinced he was in front of me, I thought differently. What made it so difficult was that I was stuck on the highway, I could not exit and with the trucks passing we could barely understand each other.
Finally 22KM from Istanbul, panic started to set in. I had no GPS, no way to reach Volkan's house and the traffic although Luke said was light seems pretty challenging to me.
Within 3 minutes of stopping 4 cop cars were surrounding me, all speaking Turkish, it was a freakin nightmare. Now it's dark too...
Get's better, we were finally reunited then I hit reserve on my gas tank, signaled Luke and continued to stick to him like industrial strength velcro. No gas stations so I finally ran out of gas and we were almost separated again.
Had to siphon gas out of his bike to mine...on the side of the freeway.
I think we finally made it to Volkan's house by 11pm. We did everything I didn't want to do
1. ride through Istanbul
2. do it after a long day of riding
3. do it in the dark
But we made it. 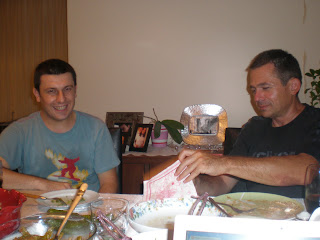 And his 5 month old girl 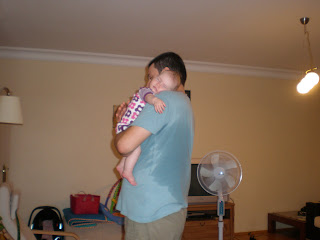 We ate a feast prepared by his lovely wife and then tried to sleep a sweat drenched night....I've just been woken up by the prayer reminder to wakey wakey to eat before sunrise, Ramadan you know!
Posted by specialagentnancy at 7:00 PM No comments:

Thank God I was early....one bag to check in with all my gear; boots, knee pads, jacket, pants, armor, side hard cases, frame, cot, tent (had to move the stakes to the checked bag, deadly weapon you know....I could if provoked sufficiently (which I was by the Indian woman sitting in the seat in front of me on my first of 3 flights) stake someone down to the cabin floor.

The bad news; 68 lbs (18 over the limit) the even worst news $150 excess weight fee. Luckily the helpful check in person suggested I check one of the hard cases as my second bag for $55 instead. Yes, I was that annoying person who hogs time at the check in desk to the ire of all waiting in the Disneyland line behind me.

I had fun with the poor folks at the security checkpoint screening. I watched carefully the face of the woman tasked with viewing my assortment of tools, tent poles and helmet through the X-ray machine. It was a odd look that conveyed "you've got to be kidding" and "no way in hell".

After a grueling 2nd flight I landed in Paris and to ease the cramped neck and residual sharp pain under my left shoulder blade from last week's riding (thanks Paul and Andy) I found this Thai woman with a grip like the Rancor from Return of the Jedi. 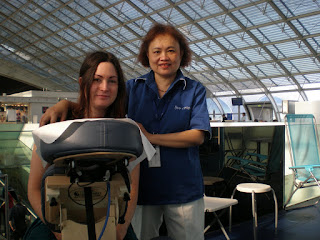 Then I found a real Cafe Au Lait and the most awesome bottle of Nicolas Feuillatte Champagne ever. It comes in it's own insulated sleeve. The croissant was blessedly greasy and crumbled nicely on my black shirt. 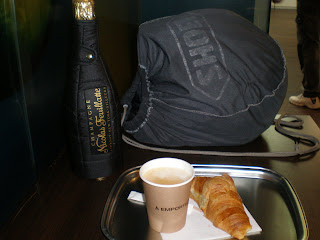 Last flight to Sofia...where I passed rather quickly through customs and saw Luke's smiling face which was only  slightly less exhilarating than seeing my luggage make it. 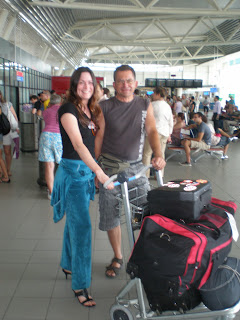 As we left the airport we drove through the Gypsy quarter where horses roam freely
and apparently children too. 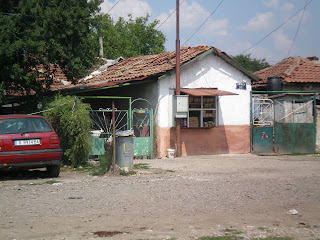 This is the driveway to Luke's house...

Tomorrow we leave for Trigrad and that fateful road where I crashed last year. I'm going to enjoy myself the way I was meant to and will take some great photos. Then on to the village where my shoulded got put back into place by a kind soul and fed stuffed peppers to die for by my Bulgarian Mama Zarka!
Posted by specialagentnancy at 9:55 AM 4 comments: