Hell, this is definitely Hell....

Now I knew it would be hot. I expected it, last year it was pretty miserably hot but dry and you know what, for all those annoying quips of "but its a dry heat" well it really does make a difference.
95-103 F heat is nothing without the humidity....So the ride along the Aegean and Mediterranean, although beautiful have been exhausting.

Just standing still in the shade I will be drenched in my own sweat in less than 10 minutes and forget sleeping. It's a sauna at night.

But in spite of all that, it's been heaven too. Left Kas for Mt Olympus and the famous treehouses.

View of rocky mountains all around from my hammock.

This is my treehouse, I was rather disappointed there really weren't in the trees but merely built with trees.

Now the dinner here was the BEST! It was all homemade food, and one of my favorites; cabbage rolls.
It's rare to see them on a restaurant menu, it's a homemade thing and since this place hyped the 'homemade' food we chose it and were not disappointed.
This plate is all vegetarian (GASP!) and so colorful, it was more dazzling than an impressionist painting.

The Treehouse place is run by 2 brothers and this one sister and she showed me how to make Menemen!

Last add a few eggs and voila, heaven in a plate.

Manish and I wanted to go see the naturally occurring flames coming out of the top of Mt Olympus so we packed up on the bike and rode there (I just could not ride in a van packed full of French kids)
Of course, it was at night, in sweltering heat and within a couple minutes were completed drenched in our own sweat. I felt so stupid doing this hike at night before a 300+ KM ride the next day, I stopped partway there and Manish continued alone. 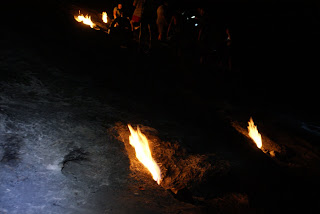 And it's a good thing too, the next day we woke, packed up and started along the coast. Now everyone we  told, insisted we not take the coastal road to Anamur Castle but instead motorway....I started to wonder, is there massive construction? An insurrection? Or a conspiracy to keep us from one of the most beautiful spots in all of Turkey?
It's reason #3.
Check out this roadside secluded inlet with SAND...that's right, real sand, not a lot of it mind you but enough to skwish through your toes and feel like you are on a real beach (it's usually rocks)

Had a great lunch then swam in the water and napped for a couple of hours then back on the road to Anamur, the road everyone said not to take.

Nothing but Amazing twisties and valley's with villages and a little construction. The equivalent of Hwy 1 in California but with Turkish flags flying everywhere. (Thanks Mert for suggesting it)
Arrived in Anamur as the sun was setting and stopped at Camp Pullu, where hoards of yellow shirted staff stand around and try to look busy. Even Manish was disgusted with their indifference and slow service. Checking in and finding a campsite was like going through security at the airport.

It was a miserable night. We got scammed with a 100TL dinner (about 75 US) at a roadside restaurant that should have cost around $40 US....and it gets better!
I dropped my keys in the Turkish toilet. I'll leave it at that.
But got up early and visited Anamur Castle for free, got there before the ticket seller opened the kiosk.

Next stop Konya where I hope to hear from Bontoa on ADV Rider in time for some Turkish Hospitality.
Posted by specialagentnancy at 11:15 PM No comments:

Woke up and thought, today has to be better than yesterday and boy was it ever.

First stop, in an ultra hot valley near an abandoned Greek settlement now a Unesco world heritage site. Kayakoy (oops I spelled Kayaboy by mistake first.....yeah I did have a nice date with a boy the night before) 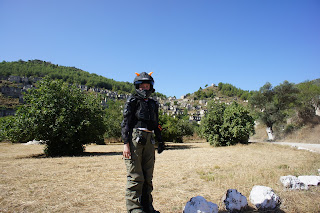 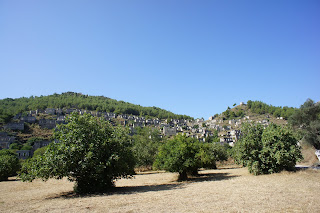 Then rode along the Mediterranean coast along twisty roads with gorgeous blue inlets like this one below.

View of bay from the tent

Went for a cave dive and had the same stupid problem with my mask filling up with water. This time I didn't panic, kept clearing it and finally figured out the problem and enjoyed the rest of the diving.

Oh yeah and I didn't have enough weight, finally ended up with 12 kilos in my jacket.

DickyB in Kas came to have a drink with us.

Notice the huge blue yatch in the background?
And finally found my favorite meal Manti!

Found out why its so darn good here, she makes it fresh nightly 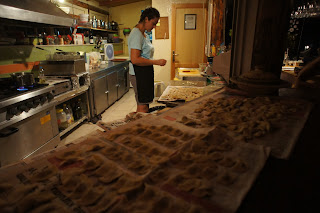 Love these little rest areas and trying to brush my hair is not an easy thing.

Stealing from the local orchards; figs

Went into town and had a San Francisco juice drink

Manish bought goggles and we made fun of the instructions....

Wandered around looking for the famous Kas night market but never did find it.

Compensated ourselves with an excellent meal of stuffed peppers, eggplant and lamb, soup, yogurt. 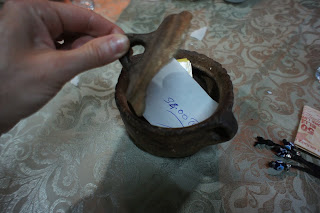 Went back to the Kas Dive Camping and this is the view from my tent! 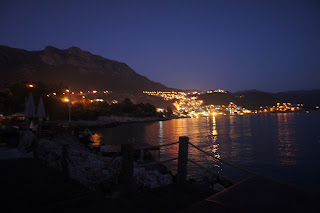 And the next morning before everyone is up. 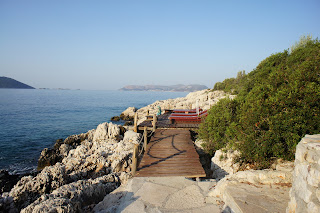 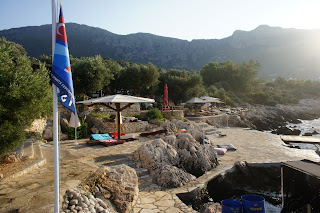 Got on the bikes for another short 100km ride to Mt Olympus treehouses.
Stopped at this roadside pastry shop and gorged ourselves on all kinds of pastries. 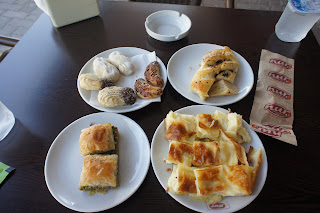 And I'll leave you with this funny photo!