Had some nice dreams last night. Woke up to the sound of those kiwi birds. They are nocturnal so you only hear them at night. Holming dropped me off for the magic bus a little early where I met a girl Mari from Japan but she was going on a different tour.
Then met the two tour guides, Ian and Greg and we got on the big magic bus, (mushrooms not included) stopped at two hostels to pick up more passengers and off we go to Mt. Eden, an extinct volcano. In total 64 volcano's dot the Auckland cityscape. Nice view from the top... 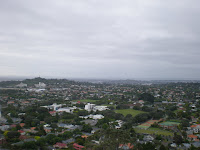 April fools. The ultimate prank. A group of University students put a huge pile of tires in the hole and lit them on fire early one morning. Residents around it saw the billowing black cloud coming from the center of the volcano and packed themselves into cars for a mad exodus from the city. No one wanted to go up and investigate but eventually the police realized it was a prank and everyone was told to return home. There are cows all over the mount and according to our driver they like to lick the bus tires. So that's the funny taste in my steak last night?!?!

Trees: In the downtown they leave them be, out in the country they cleared them out. It's said that some unscrupulous land sellers in England took advantage of many buyers selling them land say in the lake Waitomo region. Can you imagine? Move your whole family and life, bringing everything you own to your new home just to find out your farm land is at the bottom of a lake.

Stopped off the road at a food pit stop and there was a bacon restaurant. Bacon and Eggs. Bacon on Mac'n'Cheese (which I had and I can feel my arteries clogging as I type) and Ian had a BLT with half a pig between the buns.

Also had a hot chocolate. It wasn't very chocolaty, and it tasted incredibly strong. Everything here, meat, milk, eggs all have such strong flavors. Trying to get used to it.

We went around the bus with a microphone and introduced ourselves. Name, where we live, what we do and a personal problem. Guess what mine was? Max is French, cute and very single, hello Max. Noel is from SF and a tattoo artist. Some more Frenchies, Irish girls who drink too much, and a couple American boys who have crazy girlfriends waiting for them to come home. All in all, an interesting fun bunch. Just passed through Hadley where there is a coal burning power station. Plug in those electric cars and sleep better at night folks.

Of course Kiwi's have funny ways to talk. They say cheers all the time but without holding a cocktail. They also like to say "it's all good" and "right, right" and one more that sounds like "nice ass" but it's something else.

Giant rolls of hay are wrapped in light green bags so the fields look like the Jolly Green Giant
dropped his bag of green marshmallows all over. 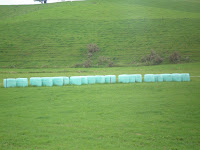 One of the girls who introduced herself said her personal problem was that she gets sick easily so sure enough, she did.
Then pukey girl puked a second time, but this time she sat next to me. If it happens one more time there will be group puking going on. (Thanks Leslie for packing my lunch in a plastic bag...) 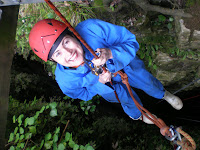 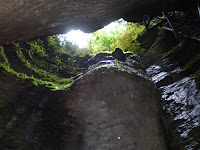 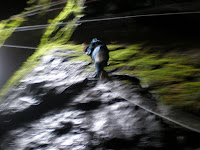 Free fall on lines to a cavern floor about 6 stories down (maybe more-hard to tell) with Rodney. 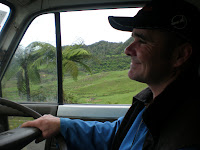 It took me 4 times to get his name right...that accent is so hard to get used to. He chatted away furiously (it was only us, everyone else opted for freezing cold cave tubing) and I swear I understood possibly every 6th word.
He had me put on some huge nasty overalls then started strapping me up with ropes and buckles and when we were almost done I said, "this is probably not the best time to tell you I have to pee". 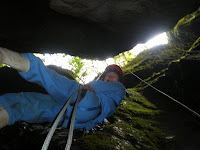 Next on to the glow worm caves where we saw gorgeous limestone formation and glided down a very cold underwater river in a boat to see the constellation above of hundreds of thousands of glow worms. Mesmerizing. 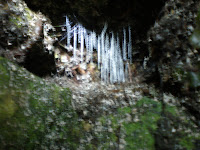 Nice walk back to the bus with cute little flowers that smelled of honeysuckle and jasmin.
I put my nose in one so much all the orange pollen was smeared over me and I got strange looks from a couple people. 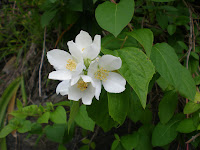 Stopped at the town where another power plant is located on a river with a dam. There is a 'Golden Gate' looking suspension bridge from the town to the power plant. 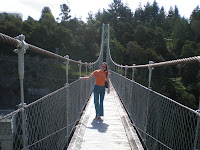 It was built to allow the employees to get to work. Next we meandered through a town where the brand "pump" water is bottled. And let me tell you, it's all slow going. No highways here, just rolling hills and windy roads. Just drove by a sign that said "relief milker available". ???

Arrived at our hostel, the floor above squeeks when someone is walking. (note to self, drink a lot of dig out earplugs tonight).

The hostel has a natural thermal hot pool that I might hit after the event tonight.

Went to the Maori village show and dinner. I cringed a little as I paid $50 and hoped it wouldn't be a cheesy event. All my fears were left behind quickly enough.
I'd like to try and describe the beauty and reverence of the welcoming ceremony, the uniqueness of the village depicting normal daily life, the customs and intricate facial and body tattoos. In one word, awesome. And I mean awesome as the word uttered by the first deep sea expedition where glowing and phosphorescent marine life was found or awesome as meant when one simply cannot find any other word to describe something they have never seen before and are totally overwhelmed by.
(Oh and Leslie, I found hot Maori guy to smear lamb all over) We first went to a welcome area where a challenge was performed, then into the village full of tall trees and shrubs dotted with their small homes where we met them one by one and learned of their ways of life. Then into an audience hall where they performed many dances and most of them quite expressive. Then on to the dining all where all the food is cooked in the earth in their own juices. Wonderful! I filmed some of it below and you can watch a clip of the welcome ceremony. A truly magical evening I will never forget. (will post it tomorrow, come back, its incredible. Not like this internet connection which is far from incredible, or perhaps incredibly slow so I can't get it uploaded.
Posted by specialagentnancy at 11:07 PM