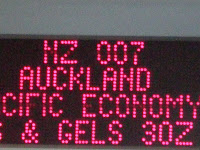 007! Truly. It was flight NZ007. Now the customs official in Auckland didn’t think it was funny that I simply wrote 007 on my entry paperwork, he crossed it out and wrote NZ7. Pronouncing “N” and “Zed” “seven” with an eye roll of my friend Chad’s caliber. Making friends already.

I also made a friend at the check in counter at SFO. I gave him my best smile as I walked up after waiting what always seems like an eternity to check in my bags. He asked me if I wanted a good seat, to which I replied, “No.” Startled he looked up and then I said “I want a really really good seat” and boy did I get it. Exit aisle, window with no one sitting next to me but I did get a cute Kiwi sitting in the seat in front who helped me smuggle in more booze than I was allowed. Leslie’s lament is how expensive the alcohol is here so they will be well stocked for a couple months at least.

Now mind you, perhaps it’s because I spend so much time traveling now but I think I managed to sleep at least 6 and maybe even 8 hours on that flight. Left SFO at 7pm, of course after spending 5 hours working on my Cougar then going to swim at Koret, preceded by a late night at the opera before and a frenetic packing early that morning, but I digress.

I was able to fit in Batman the dark knight 3 hours, sleep then Wall-E and then we landed! Of course, it’s a lie to call it sleep, more like torture but well I put on my fancy silk eye cover and dozed in contortionist positions Mongolian acrobats would be jealous of.

New Zealand takes customs very seriously. They have not one occurrence of rabies, very little disease and many indigenous plants that they protect reverently. So they announced on the plane over the loud speaker a whole list of scary penalties and disagreeable things that could happen if you were caught lying on the forms.

Welcome to New Zealand. Turns out the weather is rainy in New Zealand, which s 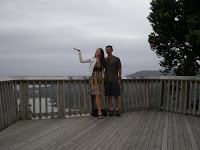 uits my mood well. (but I jump ahead)

Holming was right on time. 5am. Eee Ghad, if I wasn’t convinced of his friendship, now I am. What was I thinking but then there weren’t that many flights to choose from anyway.I am proud to announce that when we walked up to the car, I went to the correct side, the passenger side, on the left. We drove out of the airport in pitch black, even the sun wasn’t up yet. Down winding roads to their very cute house tucked amidst tall trees and ferns. I have the whole lower half of the house to myself and a shower stall that would be an issue for anyone over a size 10.

They don’t believe in scald guards here so I think I burned off a thick layer of calluses from the bottom of my feet when I stepped into the pooled 200 degree water. I was grumbling Friday night after my pedicure, never convinced that she really scrapes enough dead skin off, probably a good thing I thought to myself as I hopped from foot to foot like when you eat something too hot and suck in as much air as possible to cool it down.

They have a wood burning fireplace. I’m watching it now as I type. Real flames and not gas. OK OK, well it’s a fake log but that still counts.

We started with driving to the little village up the road for a $40 breakfast. When we arrived at 6:55am, we asked when the café was opening and she said in 5 minutes. It was a bit comical. Sh 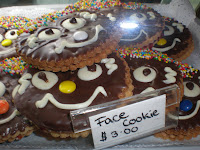 e had this, ‘no you have to wait outside in the rain until it’s 7am’ look. They had “face cookies” in the display case, I just had to take a photo. 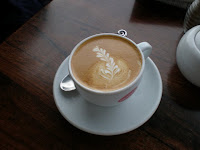 And apparently when you get anything with froth on it, they trace out a lovely fern leaf on it. Leslie says it’s all in the wrist.


Well we finally sat down and I had lamb!

It’s actually called mince with poached eggs, super yummy and most welcome after the thing they called “breakfast” on that airplane. I then decided that 2 US dollars wouldn’t go very far so I pulled out monopoly money from the machine. It’s plastic. It’s brightly colored. It’s all different sizes and the best part is it’s .55 to the one US dollar! Just a few months ago, it was .85 tothe dollar, so I picked the right time to come. 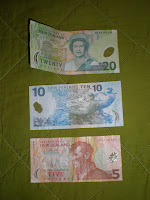 Hopped back in the car and drove to a visitor center where there was an awesome Maori totem pole with well, er um, some very seriously realistic male accoutrements. 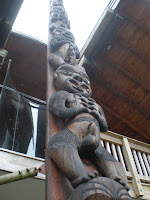 Then we headed downtown. Still getting into the car on the correct side which I suspect will become harder as my brain capacity wears down from exhaustion, but for now I’m holding it together. We proceeded to go to the highest building in the southern hemisphere, sort of like the Seattle needle or the Toronto tower. We walked the round room and sat down for a nice view. We took the glass floor elevator down and walked through the casino there and saw some very gloomy faces at the poker tables. We then walked to an 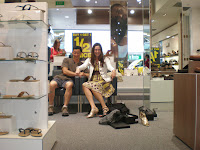 outdoor market that used to be an incinerator, then some shopping for Keens which arrived too late for my trip.After finding a pair that cost $180 NZ (which would roughly be $100 US) I opted instead for the super sexy, strappy highheels at the store next door with a killer sale going on. Practical Nancy.

Well we then headed to some fun pedestrian streets with boutiques where I found more nick nacks. And Dad, I found an oven mitt even you will use, instead of my nice towels.

We meandered into many stores, one of them being the local liquor store where I proceeded to glean an education on the local sparkling wines. (already bought 3 bottles-note to self, find accomplice to bring back more than limit of bubbly)

I found a cool knife holder. Can’t even describe how cool it is so I’ll just put the photo here. 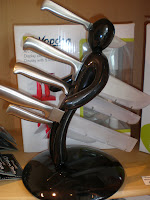 I also found the cutest hat, it’s a kiwi bird with the long yellow beak. 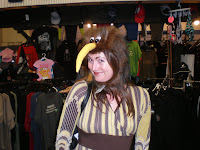 Then down a little alley street to find a very old rustic rounded small door where perhaps a hobbit might live but alas it was barred shut. 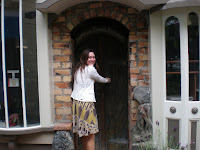 Now traveling abroad always brings quirky experiences like seeing strange signs and scratching your head wondering what the hell they really mean like on this one here. Caution, trucks manoeuvring in this vicinity. Where do trucks not menoeuvre? Oh and I purposefully spelled that “wrong”, you know they write things different here. 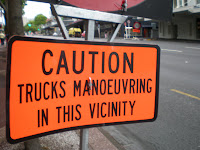 This place is full of neat pubs so I might actually, *gasp* drink a BEER one of these nights. 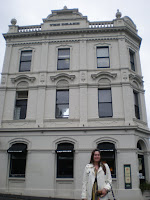 We drove to a lookout point where we saw the Pukeko birds. Cute blue birds with goofy walks and no wings. I filmed some while Holming was saying; oh Leslie is going to be so jealous. We saw a whole family but I do attest I did the ‘focus so much on the filming of them that I didn’t quit get to watch them enough with my eyes’. I hope the video turns out well. (I am writing this later, after some local bubbly and I dare say, they didn’t, turn out, that is…) 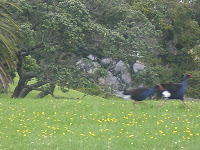 Time to pick up Leslie from work and headed to the grocery store. I mysteriously gravitated to the champagne section, again. Bought some fun feather and flower hair pins for my hair (Leo, you’ll love these, they will tickle your nose while you twirl me on the floor) and drove home.

Leslie and Holming are both on the couch with their laptops and I with my alphasmart. 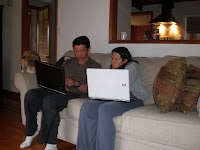 Kinda weird and surreal. Switches are upside down. They use DE-humidifiers here. The outlets have on/off switches and the coke here are in glass bottles and delicious. Now I’ve heard from people who have gone to the Coke factory in Georgia that the recipe changes from country to country so I always make the Coke taste test a top priority.

Irony. Irony is mailing a copy ofthe mailbox key to my dad who can’t get into the mailbox. What was the postman’s name again. Jeze Louise!

So dinner is almost ready. Guess what lucky Nancy is having??? Yep, you guessed it. Lamb. I plan to be rightly sick of it by the time I leave next Friday. The local bubbly is quite good but then the deliriousness (is that a word?) has set in by now, so whatever I say from here on out is nonsense.

Posted by specialagentnancy at 2:19 PM