A catalog of a boring day
Now let me begin by saying that I enjoy my quiet time and I especially enjoy the rain so I'm not too upset about it however I am going to miss Milford Sound so I'm not happy about that, on top of paying $65 to change my ticket.
Got my same room and same bed for our second unforeseen night in Franz Josef. I am one of the lucky ones because when I went by the office an hour later they were handing out space on the floor, no more beds.
Schlepped through pouring rain to the Internet bus and after spending close to two hours in there downloading everything I had and publishing two days of blogs I decided I wasn't wet enough and went out to venture through town.
Ended up in a cafe where they made my hot chocolate

blessedly hot and gave me those marshmallows again. (they taste like bubble gum) I was sitting there trying to think of a way to describe this place and after hearing Mazzy Star and now Sarah McLaughlin play on the speakers, I'd like to call it the cafe of bad music.Warming my frozen toes in front of the fireplace

. I trekked through many a muddy path in these babies. They have saved my arse many times now. I'm usually soaked from the knees down.

Next I hit the supermarket although there is nothing super about it. I went to the wine section and bought the most expensive bottle of wine I could find, some lamb chops, some weird looking root vegetables that I think Leslie fed me already and checked out the chip aisle. Lamb and Mint potato chips.

No joke. Although, it is clearing up and not raining as hard, I might walk around the bend and photograph the swollen and dangerous river just for effect.
http://picasaweb.google.com/nancy.girouard/NewZealand#5273232049730799442

There is apparently only one road to Queenstown and it's flooded. Dave at the Internet shop said it's rare that it's closed like that...suggested that usually it's due to the snow, not rain.
Oh and BTW, the reason the road was closed is because it actually collapsed.

Incidentally, he's never been to the glacier and he's lived here 3 years.

We are actually starting to see the sun poke through the clouds, and there is only a slight drizzle now. We can hear the birds and a few are actually flying about, a good sign.
Pukey girl is here. She decided to stay 3 nights in Franz Josef and some of us were glad to realize it this morning while we were headed out of town. So let me tell you more about her since she's received more honorable mentions than any other single thing, even the cute Kiwi birds and cute Kiwi boys. I've talked about her a lot, well because she throws up a lot, really...She's Chinese but lives in Australia. She brought both her parents that are comical to watch and speak not one word of English. Her dad treats her like a two year old, pointing out cars down the road when they cross in case she can't see them. Her mother, well her mother seems utterly lost all the time. Pukey girl sings incredibly well as we learned on the way back from the Maori dinner when everyone had to sing a song on the bus. She has no idea how to turn on a gas stove, click click click click click while there is a full flame going. Each time she got on the bus she sat in a different seat, forcing some poor innocent person to sit in her last crime scene. Pukey girl pissed off Mike so much that he rightly scolded her saying, "when you feel you are going to get sick, for God Sakes girl, say something instead of throwing up all over my bus". Right now she's just finished cooking the most vile and strong smelling soup I've ever known. I think it must be half vinegar and her mom is loudly slurping it. That's Pukey girl and her family. I suppose I should ask her name but I've given her the Nancy glare a couple times so I think it's best that I just steer clear and besides Pukey girl is far funnier.

Next decided to test the ovens by warming up the left over pizza. It looked like cooled lava by the time I remembered to go back to it. (Dad, this probably seems familiar) but it was edible. I put the rest of my groceries in the fridge. You always have to mark your things with a bright green label.
Name: Nancy Girouard
Departure: Never
Room: 3

Wine bottles here all have screw tops. Well I did buy one $50 bottle of wine that had a proper cork but the one I bought for tonight didn't...we shall see.


Then we walked down a gorgeous nature path where we heard many birds singing from joy because the rain stopped. Maxime started to sing Jacques Briel famous song "ne me quitte pas", because he was joyous too. 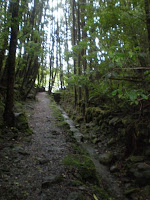 In case you don't know who Jacques Briel is well here's a funny spoof of him...
http://www.youtube.com/watch?v=uSgViEzhieU

He then convinced me to walk the 4km to see Franz Josef glacier.

Well actually he first said it was 2km then we got to the sign and it was 4km. No matter. The rain is a light drizzle now and very pleasant walk in the valley. We stopped along the river where there were huge chunks of ice.I could hear them crashing down the river, it sounded like a giant martini shaker.

Got to the Glacier and well it was awesome.

There's that word again and meant in the same totally amazed, dumbfounded, humbled and impressed way. So when a glacier is advancing it's because the bottom portion is melting faster than the top and when it's receding it's because the top is melting faster than the bottom.
Passed a scary looking sign that said "The glacier was here in 1750" and it was 3km from where it actually is.

There was a pretty strong ice cold wind that completely froze my hands but the 120 degree sauna took care of that. I'm still bright red 3 hours later.

Arrived at the hostel and kitty was outside.
I swear the cats here are huge. This thing is large and heavy and super lazy but he does like to be scratched under the chin. His fur is so thick that he's usually damp on the surface but if you scratch down deep he's dry.

Everyone's back in the kitchen cooking their smelly food. We aren't even going to start cooking dinner till at least 8 when everyone is done.
Well all in all it's not been such a horrible day and in fact, been full of beautiful scenery and relaxation. I really really wish I had an extra week here. *sigh*

Dinner was fantastic. So I take back that the supermarket is not super. We bought lamb chops and if they weren't the best lamb chops I have ever had. Now, besides the fact that the pinot noir that I bought was also quite good and we had had 1/2 the bottle by the time I started to order Max around the kitchen to find what I needed to make perhaps the best meal I've had since being here well...it was finger licking good. I boiled some weird and wonderful things, I grilled the lamb in a pan in the oven (yes the very same one that I created lava pizza in earlier) and some uncle bens rice in a pouch. (I am rather embarrassed at that one but full disclosure). We, I think, irritated everyone eating white bread and jam sandwiches by bringing our top notch meal to the table but who gives a damn.

I'd like to end this night in mentioning that Pukey girl is in my room! Well she was not here earlier but all of a sudden she's here. Funny.

Posted by specialagentnancy at 11:18 PM